Disclaimer: The history and stories that I’m about to recant are facts and folklore that have come from The Kentucky Standard newspaper, Nelson County Encyclopedia, and personal accounts of neighbors and family members who once lived in this home.


The house is best known for three things: (1) the Civil War skirmish here in 1863; (2) the architecture of the home, such as the elaborate ironwork outside and woodwork inside; and (3) the many haunting ghost stories.

This house was built in 1857–59 by John R. Jones, his wife, and sons. Jones came here with a land grant for 1,050 acres and 40 slaves, 9 who attended the house and the others living in cabins along the perimeter of the land. One cabin is still partially standing in a grove of trees in a backfield that you can see from the winery.

In June of 1864, a band of Confederate guerillas came here from an encampment a couple of miles down the road at what was known as Camp Charity. The soldiers were securing fresh provisions of horses and food when a captain spotted a fancy saddle and decided to take it. Jones thought otherwise as he slipped into the back servants’ entrance under the stairway to the house and grabbed his rifle. Jones shot through a flowerbed of irises, which were called flags then, and into a circle of men, hitting the guerrilla captain. Of course, a gun battle ensued and the guerrillas eventually set the porches and balconies on fire before riding off to Chaplin, a small town 10 miles to the east, where they found a doctor for the captain. Unfortunately, they had to amputate the captain’s arm and this infuriated his men all the more. The Confederate soldiers returned in the evening, ambushed Jones, and shot him dead by the water well out in the back of the house.

A local attorney tells the story that as a young boy he used to play here with a friend and he remembers that when it rained you could still see the bloodstains on the concrete where Jones lay dying. That sounds like a story a little boy would remember, don’t you agree?

Well, this tragic event incited fierce sentiment among the town’s people, as you can imagine. The following month, a Union troop came through town and heard the stories from the townspeople. The Union soldiers proceeded on to Louisville to a Confederate POW camp at Cave Hill Cemetery, where they passed around a bag of beans among the prisoners. The two prisoners who drew out the black beans were brought back to Springhill where the Union soldiers asked Jones’ sons what should be done with the prisoners. To everyone’s horror, the prisoners were shot dead in the front yard in reprisal for the Confederates taking Jones’s life. There were over 150 such reprisal killings in Kentucky during the Civil War.

One of the prisoners Richard Berry was from Glasgow, Kentucky, a small town about 50 south of Springhill. His family came to carry their son’s body back home for burial. The other prisoner, his name was May Hamilton, and because he had served with a unit from Richmond Virginia it was assumed that Hamilton must have been from Virginia far across the Allegany Mountains. The local citizens were so ashamed that the innocent confederate prisoners had been executed for an incident that they had no involvement the local woman’s club prepared the body, placed it in a cast-iron casket and laid the soldier in state at the Masonic Home then he was buried in Bloomfield’s Maple Hill Cemetery. If you’re so inclined, you can find his small stone midway up the hill in the oldest part of the cemetery. It says simply “May Hamilton CSA, shot 1864.” Since then, a larger stone has been erected in his memory and reads, “He came here as a stranger, but now he lies with friends.”

A couple of summers ago on a late Saturday afternoon, a tall, dark-haired gentleman came into the wine shop. He quietly made his way over to the wine racks on the wall and inched his way around the displays reading and studying the wines. I offered the usual customer greeting and small talk about the weather, but I could tell he wasn’t looking for conversation. After he finally selected his wines and carried them to the counter, I promptly bagged and rang up his purchases on the register. As he turned and approached the door, he asked if I knew any stories about this old house. This was my cue to entice him with the stories and then sell him on a future stay at my bed-and-breakfast inn.

He listened with interest to the story about the ambush and murder of Mr. Jones. But before I could continue my story to the part about the reprisal killings, he told me of his best friend who lived in Paintsville, Ky., and that he always wanted to come to Bloomfield to locate the grave of his great-grandfather.

All the friends knew of his ancestor was that he was shot in Bloomfield and fought for the Confederacy.

“What was his name?” I inquired. “Why it was May Hamilton, I believe.” The surprise and excitement of hearing this made me gush out all the details I knew. What an eerie coincidence! 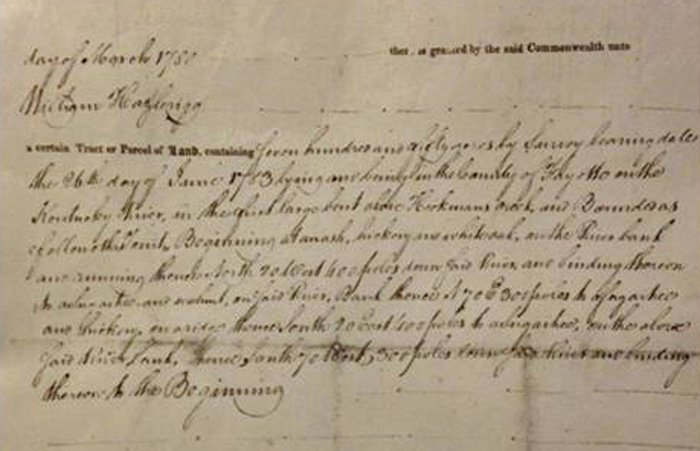 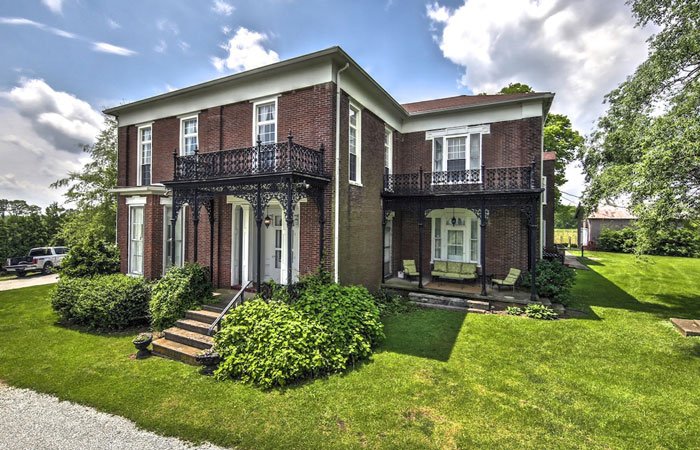 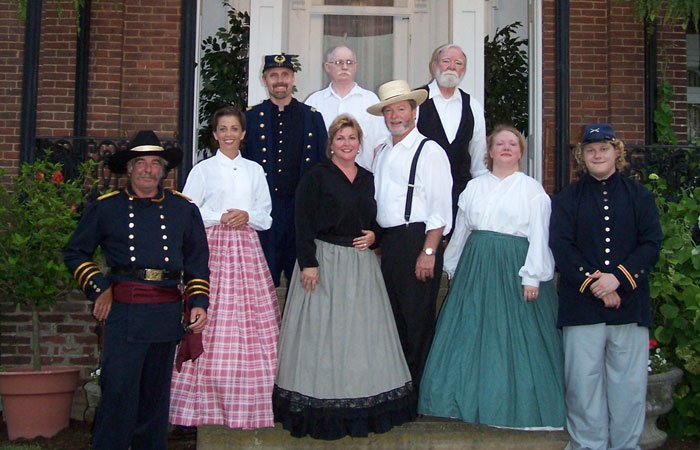 The Bloomfield area was a medical magnet. Doctors came here to study because of the sulfur and mineral springs, but more importantly, they came to study under Ephraim McDowell, who was the doctor that performed the first internal surgery in America.

Of course, during the civil war, many doctors came to Kentucky to assist with all the wounded. There was a Dr. James Hughes who was originally from Springfield but at the time he had a large farm in Missouri. While he was in the area, he fell in love with the daughter of a wealthy businessman in Springfield. They married and needed a suitable home. They heard the tragic stories and approached the Jones family with an offer to trade Dr. Hughes’s farm in Missouri for this farm here. After Dr. Hughes moved into the manor, he began building the front wing on the home rather than to rebuild the balcony and porches the Confederates had burned. That’s why there is a huge portico between the foyer and the stairway. In this way, Dr. Hughes would change the appearances to a stately manor and thereby change the haunting reputation of the home of “the darkest day of Bloomfield’s history”.

Dr. Hughes later imported the ironwork on the side porch from Paris, France, in 1904.

The wood casing in the original part of the house is Federal-style and the Hughes’ addition is the Victorian “keyhole” design. The mantel in the parlor is cast iron, as well. The wood trim of this house also includes some Greek and Egyptian influences. The door and window casings are wider at the bottom than at the top, which gives the illusion of height and was a design used by the ancient Greeks on the columns of their temples.

At the time many of the old plantation homes of Bloomfield were built, King Tut’s tomb had been discovered. It was quite a fad to use the ancient Egyptian designs, which explains why the symbol of infinity is on the large mantle of the southwest room now used as a den. When I scraped the eleven layers of wallpaper off the foyer walls, the very bottom layer was black with red and gold Egyptian designs. The black dye had permeated into the thick plaster and was quite a job to remove and bleach out. Had I known all of the histories, I would have kept a piece of that wallpaper as a memento. 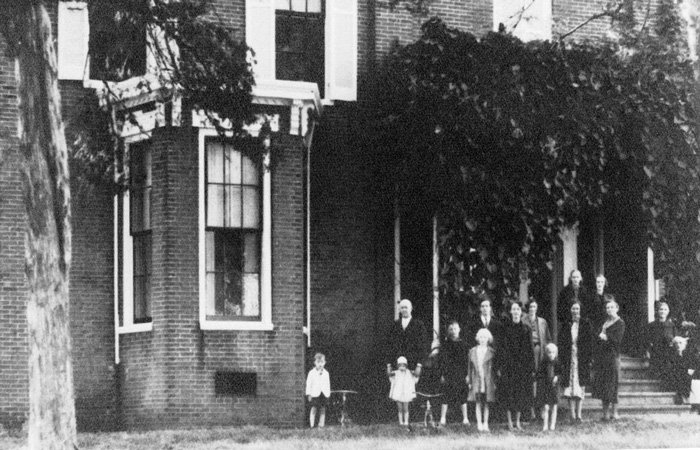 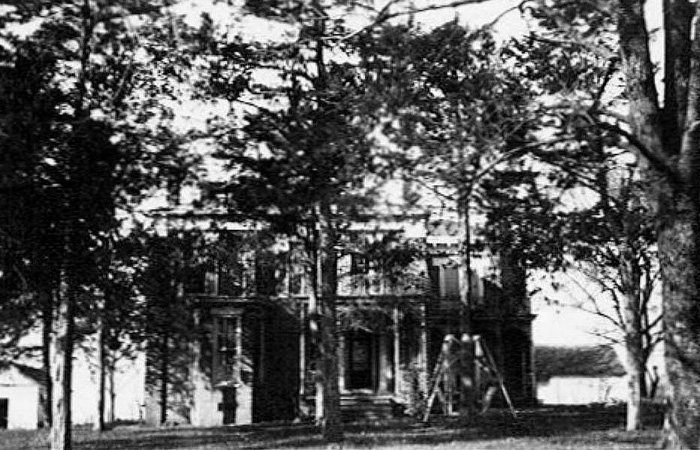 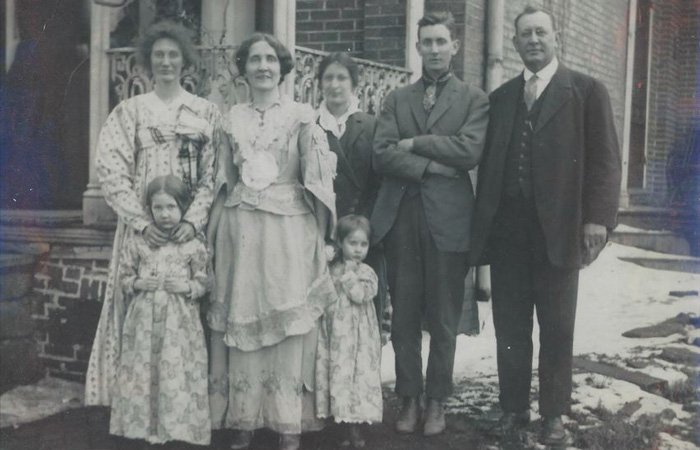 From my high school days back in the early sixties, I remember stories told by my parents as we drove past the old plantation manor with the black ironwork across the front.

“Legend has it that there is a tunnel that runs from the root cellar to another house down the road. Runaway slaves would hide there and escape through the tunnel if they had to!” my father would proclaim.

Sure enough, when I moved here, I had to check out the root cellar to search for the tunnel. The outside entrance of the cellar was easy to find, just outside and below the kitchen window. There were names and dates drawn in the concrete step in front of the roof-tin doors that led down into the damp darkness filled with cobwebs at every advance. The writing evidently marked the completion of the outside entrance by Harold and Dottie (Dennis) in 1950.

Until recently, we knew of no other entrance to the cellar. It was another manor mystery until we renovated the back wing and found a hidden trap door under the subflooring. When we opened it, our eyes fixed on the first ancient, well-worn wooden step that led down to the root cellar. The lower steps were gone, but you could see where the cripples had been painted against the brick walls below. With the lights on in the cellar, you can plainly see the huge depression where a large, flat rock, now cracked and broken in several still large pieces, covered the depression. The rock was obviously the kind one would find in a creek bed––not something you would expect to find under a house on top of the smooth, cool dirt. This must be the entrance to the tunnel that Dad had told me about every time we passed this house. My guess is that it leads down into the cave system, which has an opening on the side of a hill about a quarter of a mile down the road, just this side of the Duncan Plantation home. This old manor is now abandoned, with huge trees and overgrown vines hiding it from view from the road.

I have been coaxed a number of times to move those slabs and dig for the opening. But, I’ve been equally warned by a couple of psychics not to even budge those stones or risk releasing a river of demons that would require an exorcist to plug up the dam. One psychic foretold that I would find the remains of three black babies who had been buried down there. They had died during birth while their mothers were escaping to freedom and in the care of the good Dr. Hughes.

We are committed to ADA compliance. Read our accessibility statement.